We are furniture restoration specialists in St Albans, Hertfordshire

Geoffrey graduated from Brunel Technical College in 1989, having achieved distinctions in City and Guilds Cabinet Making alongside apprentices from Gordon Russell and John Makepeace.

Geoffrey was then employed by the family firm of Blanchards in Winchester where he worked as the head restorer, dealing in high end and museum quality antiques with clients ranging from David Frost to Joan Collins.

In 1994 Geoffrey was approached by Simon’s Antiques of Wiesbaden in Germany, where he took on the position as restorer and manager until 1999, specialising in Georgian & Regency antiques. He was then offered numerous employment opportunities within the UK and America and, having decided to return to the UK, Geoffrey chose employment with Bushwood Antiques of Redbourn Hertfordshire. During his 12 years with the company Geoffrey became the business manager, dealing with and advising clients from around the world, and travelling and working in Europe, America and China.

In 2010 Geoffrey decided to start his own business using the wealth of experience he had gained in the antiques trade, restoring and sourcing antiques for his own clients both at home and abroad. 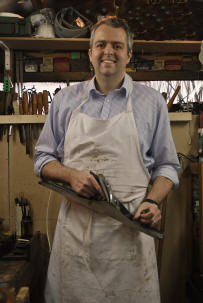